I am a 61-year-old man, and father, that rides. I have been riding for over 40 years. I started riding my brother’s bike. A homebuilt 1936 Flathead 45 on a hardtail chopper frame. The front end was extended 17 inches and raked just enough to keep the bike level. This was a beast to ride. Hand throttle on the right side, nothing else on the bars. The right foot was the only brake, rear at that. The left foot was the clutch. The shifter was under your left thigh, a three-speed tranny. First, neutral and then second and third. One little brake light mounted on the rear fender, no front fender, one little headlight mounted from the forks. No turn signals, you had to use hand signals! A very basic bike, but a lot of fun to ride. As with a lot of older machines, cars, trucks, tractors, and bikes, you had to know the correct combination to start it. My brother and I were the only two people to ever start the dang thing. I didn’t mention the kick start, I figure that one is a gimme.

Anyway, my brother had gotten married, so he could move out from mom & dads as they would not let us ride much less own a motorcycle. A death trap they called it. So his new (young) wife liked to ride, and since he didn’t have all the money he needed to work on the thing, I got to ride it also. For a price, that is. That was fine by me, as I loved it too. This bike was special to me, it was my little taste of freedom. A taste I would never forget.

The bike had a combination to start it, as I have mentioned before, but it was also a beast to ride. The flathead 45 was a very strong motor with lots of torque. So riding the bike you had to learn the ritual of starting and stopping. Anyone that has ridden one, knows of the ritual. Starting off was not that bad. You really didn’t have to worry about choking it down, as the motor had plenty of torque. Stopping was a different issue altogether. Coming to a stop had to be decided in advance because you had to gear down before you stopped. Coming to a stop you had to get the transmission into neutral, for every stop. You had to put your clutch foot on the ground, so the tranny had to be in neutral. One foot on the brake and the other foot on the clutch, you needed another foot to put down on the ground to hold it up. If you didn’t, you fell over like the little man riding the tricycle on the TV show Laugh In. lol If you didn’t put in neutral, and you took your foot off the brake, you coasted through the intersection. If you took your foot off the clutch, then the torque of the engine would carry you right on through the intersection. Once you got stopped then you would have to right foot on the brake and put it down, pick up your left foot to push in the clutch so you could put the tranny back into first gear, ready to ride when you were clear to go. It was a ritual. I know I found myself slowing down long before I got to the traffic lights in hope they would turn green before I got there. When you were approaching traffic lights that were green, you had to prepare well in advance just in case they turned red. Anyway, I think you get the picture.

The freedom this bike gave me is unlike any other activity that I participated in at the time. Because of the difficulty in the riding technique, you tended to ride in the country instead of the city. But you had to be careful there also as it only had a 2 or 2 1/2 gallon fuel tank. That bike was wrecked in an intersection when my brother had been out drinking with friends and a friend accidentally ran into the back of my brother knocking the bike down. Fuel came out of the tank, hit the hot exhaust and immediately burst into flames. From there we bought several other Harleys, from Sportsters to full dressers, eventually ending up with a 97 Heritage Springer Softail. This is the last bike my brother ever rode. He was run off the road by an elderly couple, less than a half-mile from his house. That crash broke his back in 2 places, and broke 3 ribs. This resulted in him getting hooked on pain meds and eventually having a heart attack in his sleep, killing him at age 47. It was 6 years before I rode again. RIP bro.

A couple of months before my 50th birthday I went out and bought my own bike. A 2001 Yamaha V star 1100. Two years later switched to a 1994 Harley Davidson Electraglide Classic. I wrecked it, and survived, 10 days later I bought my current bike. A 1995 Harley Davidson Tour Glide Ultra. Now I have 2 grown sons ages 27 and 22, the 27yr old rides a 2004 Wide Glide and the 22YR old rides a 2009 Road King Classic. By the way, my wife of 32 years rides also. For our 25th wedding anniversary, I bought her an 883 Sportster, and for the 32nd anniversary, I bought her a Harley Davidson Super Glide. My 27 yr old has 2 boys (toddlers) and they have been on Harleys since they were 8 months old. Needless to say, they will be riding also when the time comes. We are a riding family, that is carrying on the practice to the next generation, all because a brother rode. He passed the freedom to me, and I passed it on to my wife and 2 kids, who are passing it on to their kids.

I have included a couple of photos, one of me riding A1A in Florida at Biketoberfest a few years back, and the second of my family’s bikes at Biketoberfest in Oct 2019. We rode down from Upstate South Carolina, about 500 miles one way. I am very proud of my family as it was the longest ride for them ever, but doing it as a family, makes it very special. I hope this wasn’t too long for you. 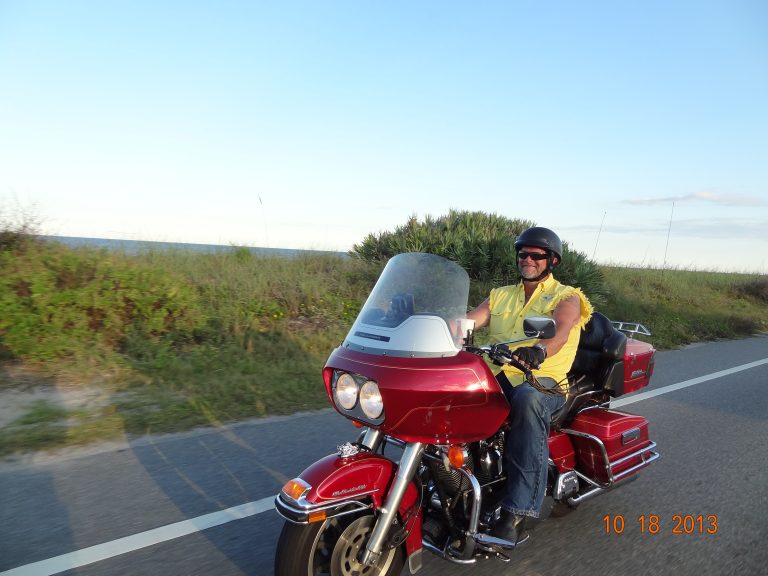