Saddle Up on the FXDR 114
Nic de Sena

The Harley-Davidson 2020 announcements sent shock waves through the motorcycling industry, to put it lightly. It was a dramatic shift from all that we know the American V-twin manufacturer to be, but those fascinating new models are a year away.

Perhaps as an act of good faith, the Bar & Shield brand has unveiled the 2019 Harley-Davidson FXDR 114—a power cruiser with a heavy nod to the sharp turn the Milwaukee manufacturer is taking. 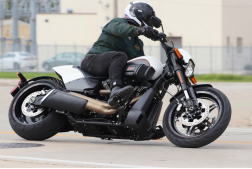 I spent some time tooling around the mean streets of Milwaukee aboard the 2019 Harley-Davidson FXDR 114 while taking in H-D’s 115th anniversary celebration in its hometown.

1. The V-Rod has been put out to pasture, and the 2019 Harley-Davidson FXDR 114 alone fills the power cruiser role.

Those are some big shoes to fill. Luckily, the FXDR is making those boots burst at the seams with a power cruiser that not only has excellent power, but also handling abilities.

2. The air/oil-cooled 114ci powerplant powers the drag-inspired FXDR. Rumbling at the center of the 2019 FXDR is the undeniably stout 114ci Milwaukee-Eight V-twin powerplant. It’s also the most potent piece of firepower in the Softail lineup, producing a claimed 119 ft/lbs at just 3500 rpm.

When the light goes green, you’ll feel all 114 cubic inches mightily leap into action. It hurls the FXDR down the road without any hesitation in fueling, pulling all the way to the 5500 rpm redline—something you might start banging off if you can’t get enough of the ample power on tap.

3. The FXDR is in Harley-Davidson’s not-so-soft Softail. Officially, the FXDR is part of the Softail lineup, but it’s a different beast altogether. H-D designers aimed to bridge the gaps between their heritage, modern styling, and that of a thoroughbred power cruiser.

The air cleaner was ripped right out of H-D’s rich history, taking inspiration from World Champion Screamin’ Eagle/Vance & Hines drag bikes, while the 2-into-1 exhaust system would be at home on any Italian machine from this decade. If anything, it’s a strong signal that Harley-Davidson is serious about change. 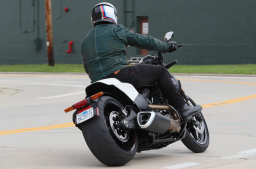 4. An all-aluminum swingarm is bolted onto the FXDR. Saving a claimed 10 pounds compared to a steel unit, the aluminum swingarm serves a few purposes in this new power cruiser. The standard steel-tube Softail swingarm does not provide enough chassis rigidity for this role.

Although I enjoyed the full range of Softails when they launched last year, this is a step forward in stiffness. Secondly, the swingarm needed to accommodate the beefy 240mm rear tire. Lastly, the new swingarm allows for optimized chassis geometry to give the FXDR something the V-Rod couldn’t claim—handling.

5. Drop the FXDR into any corner of your choice; it was built for it. At lower speeds, the FXDR weaves around the streets gently enough. However, at pace it likes a bit of input before making use of the edges of the 240mm tire and wailing through the canyon roads.

Under acceleration, the sizeable 668-pounder provides loads of stability, allowing riders to eagerly get on the gas and lunge towards your next turn. With the forward controls and lean angles just shy of 33 degrees, you’ll have plenty of room to get loose. Typical of feet-forward pegs, the first thing that will scrape the tarmac is the heel of your boots.

H-D came to this by giving the FXDR its own specific set of beautifully machined aluminum triple trees. They draw the fork closer to the head stock, thus reducing the trail and make it far more apt to leaning without sacrificing its stability.

7. The new power cruiser gets new suspension. Up front, that means a non-adjustable 43mm inverted fork featuring cartridge damping and five inches of travel, which you’ll make use of.

Under heavy braking, I found the fork leans towards the softer side and allows for a bit of dive. In the rear, a revised shock is bolted onto the FXDR, with remote spring-preload adjustment and 3.4-inches of travel.

The shock is noticeably stiffer than the fork, and helps maintain the FXDR 114’s composure when railing through corners. In the weather-battered Milwaukee streets, it does sometimes translate to energy transferred into the rider.