A problem that had become increasingly more common since around 2008 is inner primary bearing and bearing race failure. Until this time, bearing and race replacement was more commonly performed as preventive maintenance. In The Shop, we would commonly replace the bearing when performing jobs like belt and pulley replacement, transmission shift arm replacement, or when doing transmission and primary seals.

Diagnosing an Evolution model Harley or an early to mid 2000’s Twin Cam with a bad inner primary bearing was far and few between. Fast forward through a couple of part number changes (and likely Harley Davidson vender changes) and we have issues with a design that previously had no issues. If your primary drive becomes increasingly noisy, you may have a bad inner primary bearing. Especially if you notice the sound changes when pulling in the clutch lever, with rpm changes, or when shifting between neutral and first gear.

To diagnose this condition with certainty, you will need to remove the entire primary drive. When the inner primary case is removed and on the bench, a closer inspection can be made of these parts. If the bearing is bad, the bearing pins may look worn or discolored. However, there may not be a distinctive, clear indication that the bearing itself is bad. On the other hand, if the race is no good, it will be be obvious. The surface of the race will be unevenly worn where there had previously been a smooth, even finnish.

There are two speciality tools needed to make this repair. A race puller/installer tool for the bearing race and a press, preferably hydraulic, to remove and replace the inner primary bearing. When the primary drive is removed, it is important to replace the inner primary bearing seal, the alternator register seal or o-ring, and the starter seal or o-ring. It is also a good idea to go a few steps further. Remove the front pulley so all the left side transmission seals can be replaced. These are the main drive gear seal, mainshaft seal, shifter shaft seal, and quad seal (5 speed models). Also, the front pulley spacer should be changed on 5 speed models, as its outer circumference is a sealing surface.

Other areas that should be inspected when chasing primary drive noise or issues are the clutch hub inner splines, clutch basket (for possible cracking), clutch hub bearing, and the compensator assembly. You can find footage on all of these topics here at Fix My Hog. 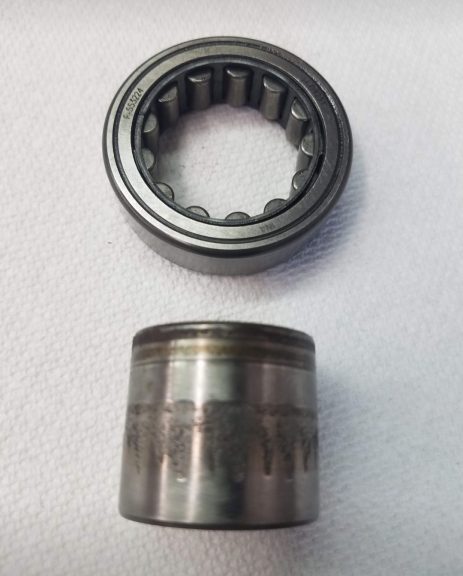 3 Responses to “In The Shop: Inner Primary Bearing and Race Failure”