I suspect my first experience with a Harley was on a three wheeler ridden by a grandfatherly policeman who stopped in front of our house. I walked closer to get a good look and he smiled, knowing I was more curious about the cycle than about him. I later learned he was a fishing buddy of my father. He had stopped to arrange their next trip. I was fascinated by the sound of that machine. He let me sit on it and I could feel the rumble and the power. He would stop by a couple times a month to see dad and entertain me. So I was hooked on Harley at a very young age.

When I graduated from high school my welder apprentice wages did not provide enough funds for both a car and a motorcycle. So I had to be content with borrowing cycles from friends who wanted to drive my car. First the 59 Olds convertible, the was a sweet ride, then the 62 Polara, Sweet, bucket seats, HP big block, dual exhaust. It was fast. Shortly before a hitch in the army I gave up the welding apprenticeship and got a job at a Chrysler assembly plant making three times the money. I came home and bought a bad ass Road Runner. Had it dyno tuned and it was hot car. Several friends wanted a chance to run it through the gears so we would swap bike for car and I got to ride their cycles. Then I got married and started a family. So there was a long stretch where the best I could do was borrow a friends bike but it was okay with me.

By 1990 the kids were grown, the wife was in college and money still was not overly plentiful so I learned there were places that rented cycles. So when we went on vacation, I would deliberately get us close to a place that rented. She loved to ride with me on trips. WE rode classic softtails, sportsters, road kings and love them all. We cruised all through the Ski area in Utah near Salt Lake City. There were rentals in Florida, Tennessee, and Nevada that provided us a fantastic cycling experience.

Then one day in 1999 she came to me with a check for $1500 and said I should use it to make a down payment on the Harley of my choice. Now there’s a keeper if ever there was such a wife! She had been saving up just for me. Wow. So then I had to choose. Of all the bikes we rented I just could not decide. So I went to the dealer in Janesville, WI and just walked back and forth looking at all the bikes. Then I noticed a red 2000 Road King and it just struck me that it was a really good looking bike. But it was already sold. Then a blue wide glide caught my eye and I loved the lines of it. But as much as I like the blue, I thought it would look better with the red from the road king. So I chose to order a wide glide in red. When I walked into Petes office I must have had a big grin on my face because he didn’t utter his usual greeting. Instead he asked, “What are you up to today?” I had been there several times and spoke with him regarding all things Harley and would usually show him my newest shirt. He said, “You didn’t get a new shirt, did we not have a new design for you?” I laid the check on the table and said, “Today, I’m putting this down on a new bike”. He blinked, then smiled and said, “Well, it’s about time. Let me grab my sheet”.

I had them install a small sporty windshield, screaming eagle mufflers and carb kit. It was a Good Friday when I picked up the bike. It was the BEST good Friday I ever had. My dream ride was a tour of the Smoky Mountains. We had cruised through by car twice when the boys were young and I really wanted to do it on the Harley. In the meantime I rode that bike all over the place. I live in Southern WI so there are numerous incredible road trips within easy travel of my house. If you are ever in southern WI go to Monroe for some fantastic swiss food, cheese, and beer then head to New Glarus and run the roads west of there. Or head to Richland County, oh nuts almost every county has fantastic hilly, curvy roads. Milwaukee can be a nuisance to ride through but they have that incredible museum there. It is well worth a look.

With that wide glide I have attended two Rolling Thunder runs to the wall, one trip to Chattanooga for the Trail of Tears and twice I have cruised the full length of the Blue Ridge Parkway. The first five or six years I averaged about 12000 miles per year. But then in 2006 my wife began having trouble with Multiple Sclerosis so I couldn’t go as often as before. The bike now has 85,000 miles and it has been trouble free for the most part. One time a wire, one lousy wire, came loose from the stator and stopped charging the battery. Later I had a shop replace the bearings in the front forks. Those are the only times she needed to visit the dealer. I replaced the brakes myself and a friend swapped tires for me as needed. It has run perfectly through scorching hot weather and even got caught in a snowstorm one time but it always ran perfect. Coming back from one ride to the Smokys, I encountered freezing drizzle with bits of hail. That was down right scary. I pulled under the hood of a bank and was just sitting there thinking I need to get to a safe place, hoping the freezing rain would turn to rain and wash off the ice. A cop pulled in and looked at me as if to ask, “What are you doing?” I pointed at the sky, then at the ground. He nodded his head yes, rolled down a window and pointed. “There are several hotels within walking distance, if you have to you can leave the bike next to the building. I’ll gladly ride it to my house and keep it safe for you.” Got to love a cop with a sense of humor!

That bike has been like a faithful companion to me. Any time I’m feeling blue, I can fire her up and instantly I’m feeling better. Get some wind in my face and all my troubles melt away.

In 2003 I spent three weeks just putting around on the Blue Ridge Parkway. I met a lot of really amazing people there by taking the side roads down to get gas or food and to camp for the night. That was my dream trip. It was amazing.

This photo is the bike loaded to go camping, There is a T-bag on the backrest and the blue thing is my tent. That was all I needed for my three week trip. 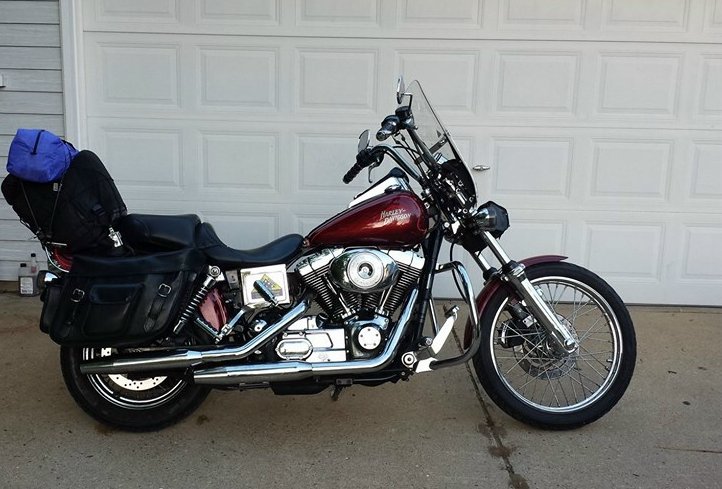