The bike is going to be built similar to the way it was prior to disassembly. A cut down Knucklehead Harley Bobber/Chopper. A no frills rider. Only this time with some more of Kevin’s personal concepts and design. You will see that although the bike will be simple and have minimal parts, Kevin’s experience with build and design will showcase every mechanical area of this motorcycle.

All of the components and hardware that had been previously removed from the motorcycle have been cleaned, repaired, rebuilt, or replaced in preparation for reassembly. In fact, the original frame was in such bad shape that Kevin is starting off with a replacement Knucklehead Harley frame. The replacement frame is not perfect. It may be missing a tab or two. However, after setting it up in a frame jig, Kevin has verified that the frame is straight and solid in form.

The first step in most bike builds is to create a rolling chassis. This basically consists of the Knucklehead Harley frame, rear wheel assembly, front end assembly, and handlebars. Sometimes it is also easy enough to bolt on a jiffy stand. Even if it is only temporary. It is important to achieve this so that the motorcycle can be mobile. Also, it is easier to handle the motorcycle in this form as you begin to add more and more weight onto the frame.

With help from Mario, Kevin lifts the motorcycle frame up and over the neck of the Springer front fork assembly. He also installs the handlebar/top tree assembly. The frame can now be lifted with a flat scissor jack and the rear wheel assembly is loosely installed. The rolling chassis and phase one of the Knucklehead Harley build is complete.

Back to the Knucklehead Build Main Page 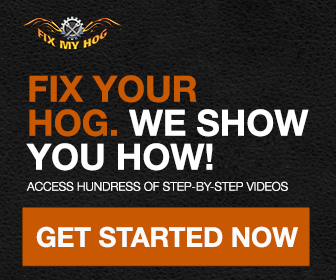