I have loved Harley Davidson since I was a little kid as my Daddy had several over the years. He started off with one, for himself, that he rebuilt from the frame up, that was rescued from a “spare parts” heap in the back room of a repair shop. Once that one was complete, he purchased another forlorn relic from being junked, that he promised my mother he was going to rebuild then sell. Unfortunately, according to my mother, he felt no one would treat this restored machine with the TLC he would so it was put with the other motorcycle. The next Harley Davidson made it into the house by way of multiple clandestine packages until one day the question of “where did the third motorcycle come from” was posed. Of course, I think my mother was suspicious before she asked, but she just gave Daddy time to be in the position of just telling what was up. This one was also going to be a rebuild-for-sale project that did not happen either. Each of the motorcycles Daddy brought home was referred to as a “winter project” as the off-riding seasons were the ones he used to work on getting each one roadworthy. Once each was ready for a test ride, my father would have to get my mother to use her car to help him get it up the bilco stairway to the outside world with a rope and perhaps a friend to guide it up the ramp to the patio. This day was always a major project with my folks bantering back & forth, trying not to put ruts in the yard with the car tires, my father balancing the motorcycle on the trip up the ramp sometimes with help – sometimes without, where the neighbor came over to take photos of the newest addition to the collection in the light of day while sharing Daddy’s celebratory beer. I always thought these days were a hoot.

You see, my Daddy was a mechanical engineer who admired the way the older Harley Davidson motorcycles were built, and the simplicity of them compared to the more “modern” models of the time – 1970’s and later. Additionally, his father had Harley-Davidsons before he and his wife had any children, putting literally thousands of miles traveling cross-country multiple times in the 1930’s. According to what I have been told, those were the days when you could just pull over to camp by the side of the road! My grandmother must have been a nonconformist to ride a motorcycle then. They kept a diary of where they traveled, which roads they took to get there, where they stopped and how much was spent on things like gas, lodging, and meals. A dream of mine has always been to try to follow at least one of these routes as closely as possible to see if any of those places are still there and compare how much the costs have changed. My grandfather passed on his love for Harley Davidson to my Daddy so that when the time was right, my Daddy decided he was going to have one for himself.

This pattern of purchasing an older motorcycle to save it from whatever catastrophe it was subjected to at the time, be it: going to the scrap yard, being used as a spare parts supply, corroding in a garage, turned into a chopper, etc. continued as noted above until my father accrued 10 machines! They ranged in years from 1943 through 1986. These he kept for many years, taking turns to ride each one depending on his mood until he was in his 50’s and decided that it may be the time to pick a few favorites and part with the rest. He passed away in 2017 and left me a 1946 (which has been sold to a friend of his since), 1956, 1973 & 1986. My plan is to keep the 1986 but the others I am trying to sell; despite being in running condition at the time of his death none have been started since Daddy has been gone. Unfortunately, for many reasons, I was not able to glean any mechanical knowledge over the years from Daddy so I have no idea how to work on these motorcycles to get them in running condition again which is why I am trying to sell the 1956 & 1973 models. 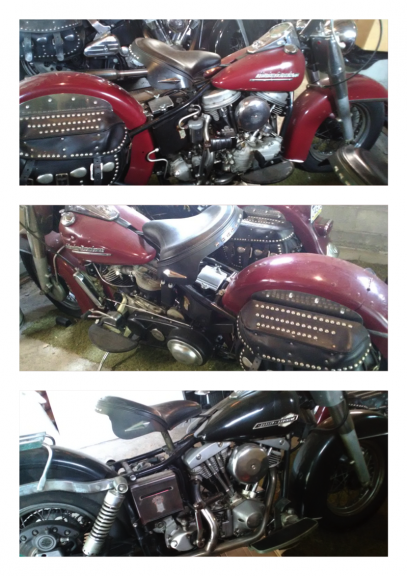 There are many fond memories of the times Daddy would take me with him on his Harley while I was growing up. He also traveled local and long distance to different events with friends on the motorcycles he so lovingly rebuilt. Some of my favorite memories are those where we rode to a small, private airport where antique bi-wing, WWII, and sail planes are flown, so Daddy could put aviation fuel in his motorcycle tank. At the time this was the only leaded fuel still available for models originally built to run on leaded gas – when we would get home Daddy would enthusiastically exclaim, “ran like a bear” when asked about the quality of his ride. This gives me warm fuzzies to think of it even now because he was just as happy as a pig in a mud hole on those days.

When I was about seven, Daddy bought a little 50cc mini-bike for me to learn how to ride a motorcycle. I spent many hours riding around the yard or following him on trails in the woods with this little bike. Around my thirteenth birthday he brought home a Harley Davidson Hummer for me to learn how to use a clutch. I was ecstatic to have my own Harley, no matter how small, to ride as I did the mini-bike (wish he had kept that small Harley as it really was a cool little bike).

When I was 25, Daddy encouraged me to get my own motorcycle license then lead me on many rides to enable me to get driving experience under my belt. He purchased a 250cc for me (although I had to pay him back for the bike and minor repairs) to start riding on my own which I did as often as I was able with Daddy, sometimes in groups, and solo. In 1999, I sold my 250 then went to a local Harley Davidson dealer to put in my order and ponied up the deposit for a 2000 883 Hugger – I was so excited to be FINALLY getting my own Harley Davidson as I had been riding a foreign model. Unfortunately, I lost my job due to a company reorganization, necessitating cancelling my order and getting my deposit returned from the dealer about 3 weeks later. I cried like a baby the whole time, but the dealer was quite sympathetic and told me to return when my situation improved. Due to the economy and the city I lived in, this did not happen. It took the death of my beloved Daddy before I was able to realize the dream of Harley Davidson ownership by way of inheriting the four he had left behind, although this is not the way I would have chosen for myself, and I took a small portion of my inheritance to purchase a 2002 Dyna Low Rider with very low mileage. This past year has been exciting for me to get back into riding as I have not been able to do so since 1999! As I said, I plan on keeping the 1983 Softail because it is the most modern of Daddy’s motorcycles and I want to keep at least one of the machines he rebuilt from the ground up. As the 1983 has been sitting in the garage I’m sure there is plenty that needs to be done in order to get it running properly again.

I plan on riding as long as I am physically able as my Daddy did before me, in loving memory of him and all the fun times we had together sharing the wind in our faces on whichever Harley Davidson he chose to take out on that day.
Thank you for your time. 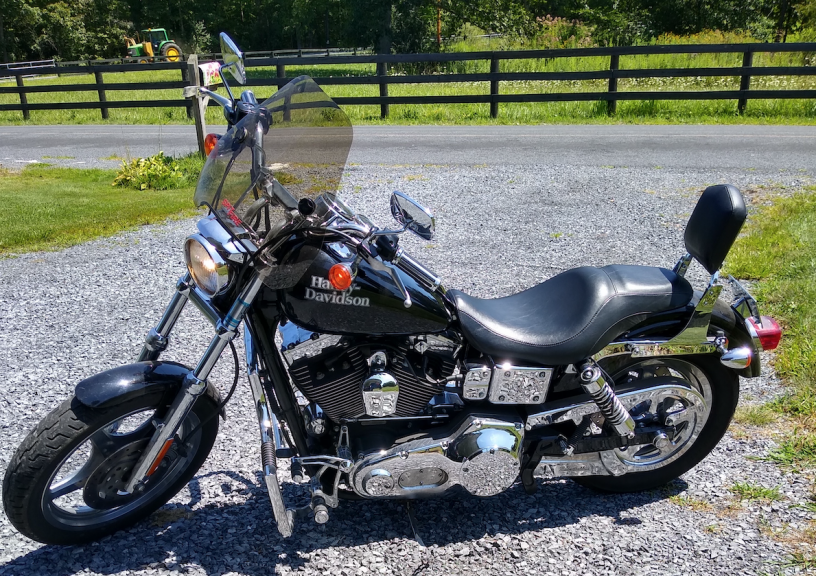