In 1971, about to be drafted for the Vietnam War, I decided to enlist in the marines and fly helicopters. About a week before I was set to report to boot camp, I was headed out for a Saturday night ride. I was riding a 1969 Sportster at the time. Riding by myself. I was going about 45 mph on a highway approaching my small Texas hometown. A 1965 Chevy pickup being driven by an old coot pulled out from a driveway straight into the side of my bike. I was thrown off and landed hard on my back. It hurt, but that was not my first concern. I could not feel or move my legs. At the hospital, the x-rays showed compression fracture of three vertebrae in my back. Thankfully, I recovered full use of my legs, but I was in a back brace and moving real slow when I got out of the hospital. I did not go to boot camp and was not drafted.

My bike was beyond reasonable repair. I did not even try. By the time I was recovered and ready to go back to work, I had hooked up with my prior girlfriend from high school and the next thing I knew, I was married and going to college. I ended up getting a BSA Rocket-3 that I slightly modified: 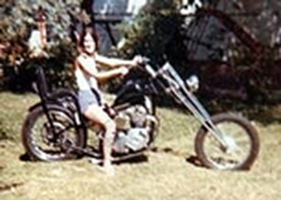 I did all the work myself. Believe me, in those days without internet, sourcing parts for a custom anything was a tough chore. I didn’t like the three little carbs on the Rocket-3. Very hard to keep synced, and sometimes would lean out and blow a piston. So I hand crafted a copper intake manifold mounted a Mikuni on the thing. That bike was a screamer.

I went to law school. While there, I worked for a lawyer whose first name was Harley. Seriously, his real name was Harley. Harley’s farther was also a lawyer. The father had ridden a lot in the old Knucklehead days but by 1970 he was just tooling around town in a white Rolls Royce Silver Cloud. But the son, Harley lived up to his name. He had some old Harleys in his garage, including this one Sportster. Harley and I would occasionally get together on a Saturday afternoon and drink a couple of cold ones and work on bikes. One day he had come over to my house and my wife came out when we were finishing up some work on his sportster. He and my wife started joking around and somehow he bet her $100 she couldn’t ride his sportster around the block. She is not a big husky woman but she is spirited. She jumped on the bike (it was already running), popped in in gear and away she went. Her motorcycle experience at that time was limited to a Honda Moped and a small Yamaha dirt bike. We sure enjoyed that $100.

Harley also had a panhead with a sidecar. One day while I was wearing my new suit, white shirt and tie, Harley said we needed to go see a client. He stuck me in the sidecar and off we went. We were flying along a street, went over a hill and started down toward a train over-pass. That’s when we saw that a repair crew had blocked the road for some repair. I yelled something and Harley slammed on the brakes and screamed something back. Somehow he got it stopped but it close. No surprise, the client Harley need to go see was actually a bar. After a few cold ones, we left to go back to the office. As I gracefully got back in the sidecar I heard a loud ripping sound as the pants of my new suit ripped open. Fortunately, there only a few guys out in the parking lot who saw my situation. I’m sure they were appropriately sympathetic.

Later, I sold that Rocket 3 and didn’t ride again from 1975 to 2016. By that time I had a knee problem with my right knee and couldn’t hold-up a full size bike. I tried some test drives but couldn’t trust my knee. So I gave up on getting a bike.

In 2016, I bought a well-worn and tired 1987 Electra Glide to work on. I have kept it ALMOST stock, except for the 96 cu. in. S&S that I just built with Super E carb and Andrews EV-27 cam, a Baker 5 Sp. with reverse, Mystery Designs IRS trike kit, custom dash I designed and built, and EFM Autoclutch. I just got this thing together yesterday and went on a short ride. Great to be in the wind again.