In 1984 I returned home from the Army after serving four years in Berlin Germany. The whole time while serving there all I saw was European motorcycles. I yearned to see and hear a Harley. My life long dream was to have one. One day while working with my team getting ready to go southern Germany for annual training; I heard the rumble of a Harley pull up in the courtyard. It brought a smile to my face. I dropped everything and ran outside. In the yard was a 1977 Low Rider the look and sound of that shovelhead was like seeing an old friend. It turned out the owner of the Harley was our new platoon sergeant . He was a veteran of the Vietnam conflict he had every badge a true warrior could have, he wore airborne wings, ranger tab and of course he also had a special forces tab. I was taken back he was a man of men and the badass was riding a Harley. I was immediately impressed. We spent the next three years working together, he took me under his wing and taught me to be a true soldier. After one of the long training exercises, we returned to Berlin depleted. During the next few days, we worked our asses off getting all our gear cleaned up. During this period I was getting homesick and the look on me was also was all to tell. Sergeant Knowles walked up to me threw me his keys for the bike and asked me to go get it from the motor pool. I couldn’t believe it I was going to ride a Harley in Berlin. The first time I was able to sit on a bike in two years. As I approached the motor pool the anxiety grew and grew. I got to the bike and fired it up drove it a whole quarter mile back to the courtyard at our barracks. That quarter-mile ride drove me to make a decision to save every penny I could for the remainder of my tour in Berlin so that I could return home and buy my own Harley.

In 1984 upon my return home I searched for two months to find the bike that was right for me. I ran across a lot of used beat-up bikes. One day a friend came to me to tell me that his neighbor died of cancer and his wife needed to sell his Harley. I went to look at the bike the next day, it blew my mind. It was a 1973 Sportster set up as a touring bike. My first impression was not for me. But after thinking and looking at the bike I knew we had a future together. So I bought the bike, the man’s wife gave me everything that came with the bike to include all the items he bought to maintain the bike. She even tried to give me his boots and leather jacket. I couldn’t except them and told her she would want them. In her heart, she wanted to keep them but thought everything should go with the bike. We had a long talk and she decided to keep them. She was truly amazing we became life long friends. This story does not end here it just starting.

I took the bike stripped all the touring equipment off it and painted the bike. I rode the bike for the next year. During that year two things happened first I realized the bike was just too small for me and then I got a call from my old boss in the Army he asked me to reenlist. I did and with a huge bonus bought my first new Harley. My older sister loved Harleys as much as I did maybe even a little more. So that Christmas I gave the bike to her. She was dating a motorcycle mechanic and he was very talented. They stripped the bike and had it all hand engraved, they also chromed it out. They upgraded it every way they could. Hubs, my sister’s boyfriend, spent every penny he had on his bike and my sisters. They were getting them ready for the upcoming shows in Asbury Park and Madison Square Garden.

During that winter my sister was diagnosed with cancer. Her bike and his was put to the side while she fought the fight of her life. She was told the next April she was not going to make it. She came to me and apologize for not finishing the bike. It blew my mind. I was so taken back that she would even think about that during this period in her life. I was being transferred back to Fort Benning, GA and was between two duty stations. I secretly got he bike from Hubs and staring working on it every waking minute I had. Finally, after moving to Georgia I called my sister and asked her to come to my new home, I sent her plane tickets. Upon her arrival at my house, I walked her to my garage to reveal the bike. She cried for nearly one hour. After we got that over with I walked the bike out to the street and fired it up. My sister was so weak she could barely walk. She got on the bike rode it approximately twenty yards and stopped and asked me to come to help her. I rode her back to my garage and put the bike away. My sister died that August. I never rode the bike again. I transferred to five other duty stations and that bike came everywhere I went, but never fired it up again. Today the bike sitting in my garage with a cover on it.

Recently my son who just turned nineteen started taking the cover off the bike and asking what it would take to fire it up. I saw that look the same one I had when Sergeant Knowles seen in my eyes when he rode his bike in the courtyard in Berlin. During my time in the military, I became totally and permanently disabled due to my injuries. I can no longer wrench on anything and would love to fire that bike back up. My sister would love for him to have her bike. As Veterans Day nears, I can only think of my sister and that bike. You see my sister was one of the reasons I joined the military in the first place. She was one of my inspirational driving force in my life. I always worked to make her proud of me. This is the first time I shared this story and my time with my sister at the end of life. It was something I kept to myself until now. 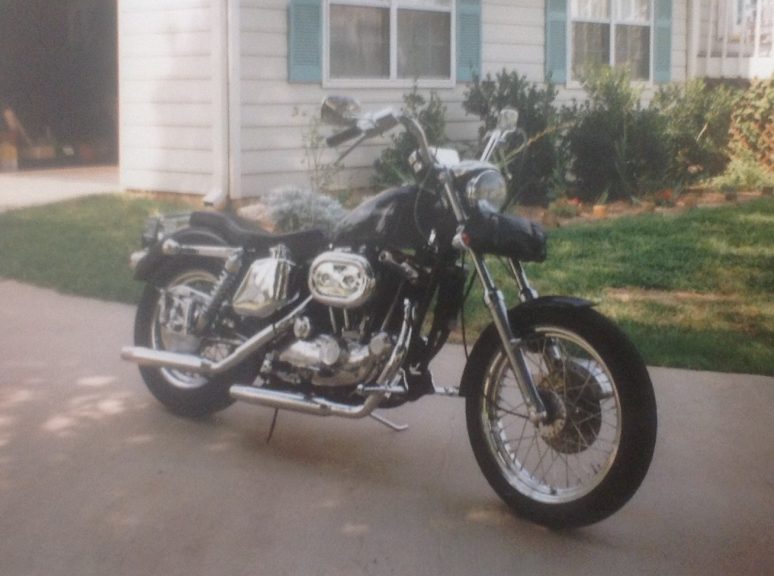