I grew up around Motorbikes all my life as my father rode everyday wind rain or hail as his only transport was his bike a Royal Enfield 150. The bike was defected by the Police in the mid 60’s for having no indicators or horn even though that’s how the bike came out, so it was given to my brothers to ride around our Farm. This is the bike I learnt to ride on. Through my young years I bought several bikes including a Honda 100 automatic a half BSA half Triumph Scrambler Bike called NIAYCHI Name It And You Can Have It. So named as it had BSA frame, Triumph Speed 100 motor and then a BSA gearbox. I moved on too several Jap bikes including a Honda XR 75, Suzuki 500 Two stroke twin ,Kawasaki 750 Triple, Yamaha XS 650, and then a 1979 American Export Bonneville T140 Triumph.

I then married and settled down anf the wife talked me into selling my Triumph and getting a pool installed. 16 years later in 2006 I was single again and I decided to tour Europe on a bike. My bike of choice was a 1999 Harley Davidson Road King Classic. I took it to Europe and did 10,000 miles and 11 countries on her. I sold the bike to a buddy I met on my rides.

I returned to Australia and was looking for a new Harley Road King but ended up buying a 1992 883 Sporty off a friend of a friend and kept this for 18 months but once you have had a Road King it’s hard to go back. I then bought a 2005 Road King Custom which was a great bike after about two years I sold this and after 18 months found another Road King this time a 2007 96 Cube 6 speed Road King Classic as this is the style I like most and I hope this is my last bike. I have customized it to suit my tastes with a Skull theme and lots of chrome.

I again went riding with a friend this time to North America in 2015 and did 18,000 miles and 42 states as well as British Columbia, Toronto, Montreal and others in Canada. I visited the Mighty Harley Davidson at their home.

I hope to be riding Harleys for a few more years yet. Here is a couple of pictures of my bike of today. From first look to finished product. 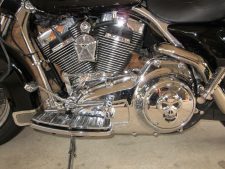