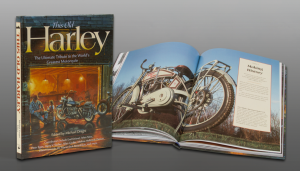 Book: This Old Harley – A Tribute Book to the World’s Greatest Motorcycle

Millions of loyal Harley fans can’t be wrong. With their distinctive styling and sound, Harley-Davidson motorcycles have won the hearts of people-from all walks of life and from all over the world. This Old Harley captures just what it is about Harleys that makes them so popular. This anthology is a tribute not only to the legendary piece of machinery, but also the stories, history, and lifestyle behind its rise as the world’s most popular bike. If you’re still in awe of the first Harley you saw, still riding and wrenching on Harleys, or still dreaming of Harleys, then this book is for you. 160 pages.

Chapter 1: In the Beginning

Chapter 3: On the Road